Click a Trivia question below to reveal the answer.

1. What Country did Sam Snead represent when he played golf?

Sam Snead was an American golfer

4. What kind of hat was Sam Snead known to wear? Hint: He was know for a folksy image.

5. What was Sam Snead’s nickname?

6. What was Sam Snead known for most?

Get a Closer Look at Our Tavern and Our Inspiration.

Samuel Jackson “Sam” Snead (May 27, 1912 – May 23, 2002) was an American golfer who was one of the top players in the world for most of 4 decades. He and two others of the greatest golfers of all time, Ben Hogan and Byron Nelson, were born within 6 months of each other in 1912. He won a record 82 PGA Tour events and about 70 others worldwide. He won seven majors: three Masters, three PGA Championships and one British Open. In spite of his great achievements, his reputation has always been slightly tainted by his failure to win a U.S. Open.

Snead was famed for his folksy image, wearing a straw hat and playing tournaments barefoot, and making such statements as “Keep close count of your nickels and dimes, stay away from whiskey, and never concede a putt.” His nickname was “Slammin’ Sammy.” He has also been admired by many for having the so-called “perfect swing,” and generated many imitators. Snead was born in Ashwood, Virginia near Hot Springs, Virginia. At the age of seven he began caddying at The Homestead in Hot Springs; he worked as an assistant pro at The Homestead at 19, and became a professional in 1934. Amazingly, the US Open always eluded him – he finished second four times between 1937 and 1949.

The world caught its first glimpse of Snead’s magic stroke at Hershey in 1936. He hit the first green 345 yards away and eventually managed to finish fifth. Desperately short of cash, a good finish at his fourth official event at Oakland earned him US $1,200.

In 1979, he became the first player to score below his age; he shot 67 and 66 in the Quad Cities Open at the age of 67. Other notable achievements include victories in the US Masters in 1949, 1952 and 1954, plus the US PGA titles in 1942, 1949 and 1951. Eight times on the Ryder Cup squad, once as non-playing captain, Snead’s involvement in golf has been a lengthy one. Two years after retiring from the Tour in 1979, he was actively involved in the creation of the Seniors’ Tour.

A consistent competitor, Snead will be remembered for the sheer magnitude of his victories and his swing will continue to be recalled with awe and envy. Snead maintained ties to Hot Springs and The Homestead for all of his life; he died in Hot Springs following complications from a stroke four days short of his 90th birthday. He was survived by two sons, Sam Jr., of Hot Springs, Virginia and Terry, of Mountain Grove, Virginia; a brother, Pete, of Pittsburgh; and two grandchildren. His wife, Audrey, died in 1990. His nephew J. C. Snead was also a PGA Tour golfer.

Snead won the PGA Tour Lifetime Achievement Award in 1998, and has been inducted into the World Golf Hall of Fame.

Sam Snead gets ground level with his ball to eye up this shot.

Mr. Snead and his Golden Retriever going out in Homestead for a round of golf.

What to Expect at Sam Snead’s Tavern

If you live and breathe the game of golf, you’re bound to hunger for more than a few birdies. At Sam Snead’s Tavern, you can feast on your passion for the game, as well as great food. Life’s too short to eat boring food. Come in and roam from room to room, savoring the rich wood decor and all the memorabilia collected by Sam as he made his way into golf history. Then choose from a wide selection of foods grilled only with locally-cured oak, that creates the most unique flavor around. Start with Sam’s appetizers, then make your selection from the Chairman’s Reserve Angus Beef, the freshest seafood, ribs or chicken. Complement all this with a fine wine or your favorite cocktail. And for the lighter appetite, there’s a wide salad and sandwich selection to be enjoyed at Sam Snead’s Tavern. Be sure to finish your meal with one of Sam’s homemade desserts. 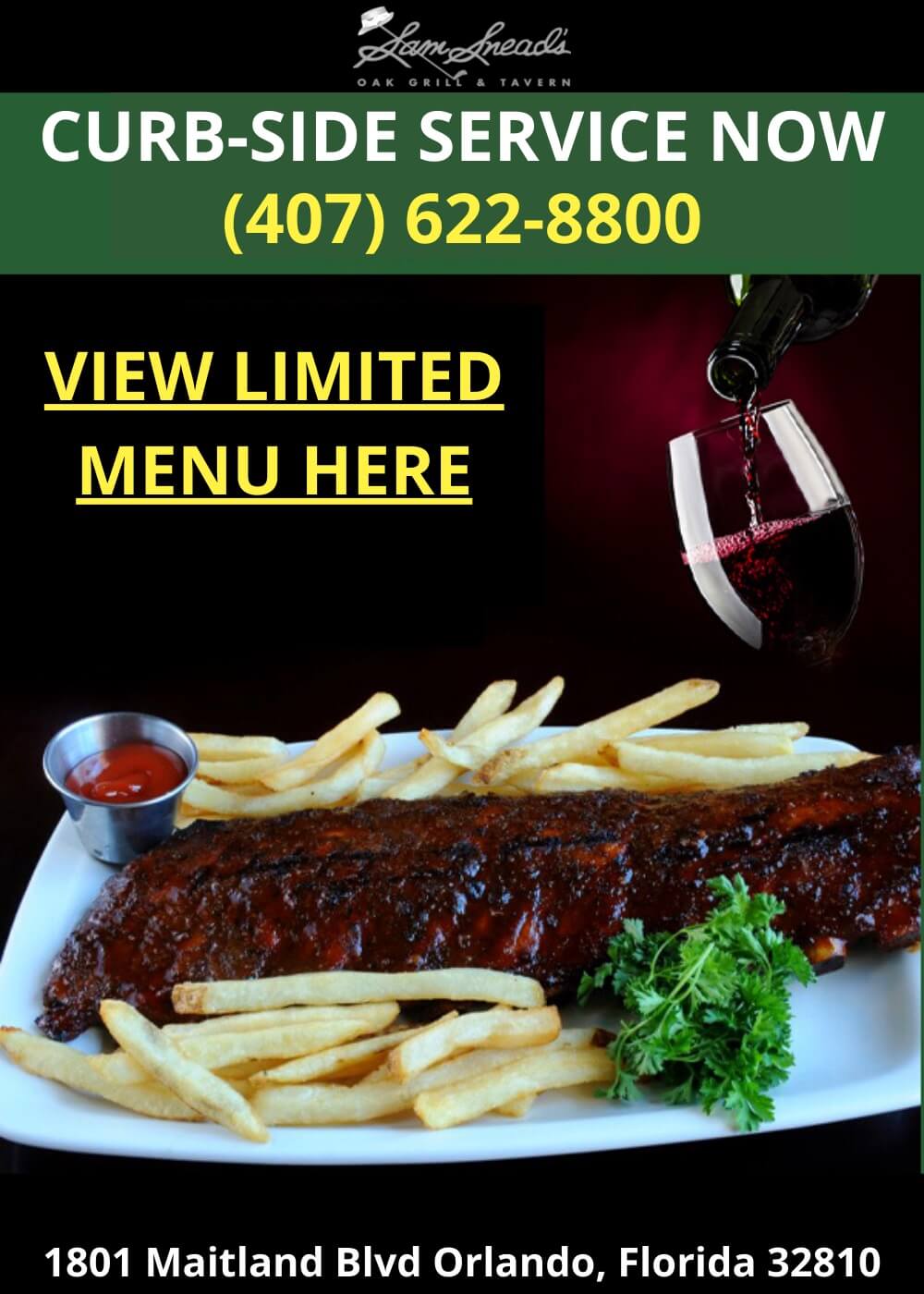